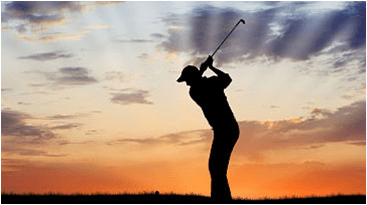 We just had to put this in our newsletter that all you guys will read at least one blurb this month. So, the questions – how many minutes of exercise does 9 holes of golf with a cart, three times a week provide?

According to estimates by Stanford researchers, golfing with a cart requires slightly more effort per minute than shuffleboard but less than archery or juggling. Unfortunately it doesn’t provide much of a workout but fortunately, you’re moving, outdoors and most likely on a beautiful course. If your practicing shots at a golf range many calculations estimate you will be “using about the same amount of energy per minute as Tai Chi.”  If you’re walking the course – good job; you’re adding about 50% to your effort level according to academic calculations but it’s still considered a light workout.

In an interesting 2010 study, “18 older men (wearing monitors that measured HR and energy expenditure) were asked to play 9 holes of golf in one session and mow the yard for 40 minutes in another session. The men burned an average of  310 calories while playing 9 holes of golf compared with about 250 while mowing. But the time spent mowing was much shorter, so the exertion per minute and exercise intensity were considerably higher per minute during mowing than golf.”

To end on a positive note, in a 2011 study older “male golfers performed much better on several different tests of balance” than those who didn’t play golf. Even though it’s not considered vigorous exercise golf can provide joy, decrease in stress, fellowship with friends, and an increase in both the “physical and psychological aspects of balance control.”  So keep on golfing fellas and enjoy it!